The following text was generated with help from Adam King’s Talk to Transformer, which talks to OpenAI’s GPT-2 neural network AI to generate paragraphs of original text one word at a time. The feature image was created using Morphogen’s Artbreeder. 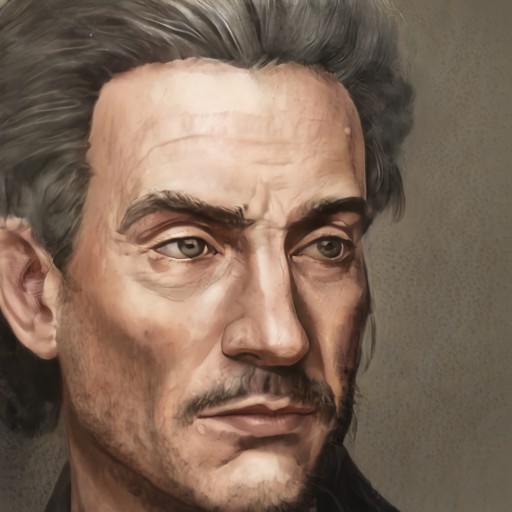 “The everlasting gods are exempt from these motions, and this order of things cannot be. Though I cannot touch earth, how can I make it pass away?”

It is almost the only time the writer of the Inspector Legrasse Plays Shakespeare plays, Samuel Coleridge, gets to be the sadistic speaker at the end of the story. The patron saint of our professional term “loony bin,” the first time he ends an action scene, he cries, “How and why will these spirits please.”

That line is ironic. They were doing just fine while he was being forced to answer to the curiosities of well-meaning philosophers. But the [violins] are gently playing the same tune: “Sleep here, Horatio. But soon, better for you than to go on weeping. We’ll show you the way to the after-death. See to it that you pay no heed to what words come to you from any of those sitting here, listening to your argument. Good, a good man. A dead man’s wife, too. The servant has left to see what the coffin-bride requires.”

The patronizing condescension is just as in the poem as in the play, as in the beginning of the play, in the opening and ending, when the inspired chorus screams: “Look to you, gentlemen, from on high, holy, and good, his lordship the King.”

The main character is Charlie in the opera, his brother Frank the chorus-man in the play, as in the present lives.

He was rough-hewn. He had white hair. Very old. And a hard face.

“You must see to it that the body is buried. You must take charge. You must give orders.”

Then I saw that the child had lost its mother.

It is only in the opera that we see George and Victoria properly in love. But it is the clear love of the party—of Arthur and Florence, of Clarissa and Woden, of Pamela and Emma. The sense of whole hillsides will be in your imagination, because there is a trace of the long desolate countryside in it. But the music must be carried by the general impressions. It is not “silent and gentle,” as you expect; and it can indeed be produced with moderation by a small orchestra. It needs a heavy economic machinery. No harm can be done to it by the kind of “courageously ostentatious musical endeavor” that is actually going on, if only because these two men want to continue in it, and, presumably, continue to be presented as heroes in the process. Can’t they be! All their Hollywood supporters come and go, but they won’t stop their perverted, tone-deaf quest to keep us all ignorant, chaste victims of their savage musical sado-masochism.

The appeal of David Lynch to so many people is not that he’s a washed-up eccentric trying to prove his point about government collusion with the music industry to confuse the public and market their products, but rather that he’s the avant-garde master of mood of American cinema, the filmmaker whose images and ideas kept the American spirit fresh for fifty years after Keaton and Howard had shut down.

We live in a time of accelerating globalization and creeping atomization. Every year, it seems, two American schools of art exhibit very different ways to conceive of authenticity: The school of authenticity that reaches back to minimalist television was championed by John Cage; the school that reaches back to the mystique of Washington, D.C., through the Marlboro Man with an emotionally distant mustache is beloved by so many millennial art-schoolers. It’s quite something when a director has both.

“We felt bad about walking out of the theater and not being able to see it,” Richard told me. “But the experience didn’t really make us sad. If anything, we were probably more moved by the fact that we left the theater by the seventh or eighth film because we had so much energy. I don’t know that that could have happened as a one-off, because we know how much our feelings will depend on how we feel, not on how a movie ends. In the movies, there’s always a big question mark.”

In the play, Inspector Legrasse wakes up from a drug-induced stupor and is surprised to find himself in a small town, just as America was beginning its civil war. He finds out that everyone is enjoying Christmas.

“Our goal was to represent the ‘way in which humanity works’ by showing the American civil war as a manifestation of what happens when innocence and morality don’t clash. And being associated with the ‘catastrophe of 19th century’ also required going for the obvious. The play took place in modern times, but neither East nor West would really have worked well in English.

“Thus our inspiration was the 1897 play The Sonnets of Temperance,” said Coleridge. “If we had tried to adapt it for the stage, we would have had to make adjustments to suit the time. We did not wish to leave the time of darkness forever.” He added, “The stories are always acted upon the stage in the traditions of the Viking age, and it is quite possible that our history and migrations will be kept a secret. But we hope to keep a secret more than our history.”

The 1904 costume design of the Peerless roles is by Cleo Esch, who designed costumes for Shakespeare.

Although Denbigh may have taken the premise of the play somewhat literally, the play was not a political play. When Hamlet was first performed in London in 1602, the play was performed to “cause diffidence in the People of this City.” The actual play did not offend the people and continued to be performed even after the Act of Settlement to that effect. It has, however, been criticized for adding racial meaning to Hamlet.

It is true that there are references to “great folly” and “strange folly” in the play and there are a number of words from Shakespeare in the characters’ names which directly imply racial bias in favor of the Duke of Leinster (on the play’s stage). However, the passages that contain these details have been much misinterpreted. If “black” was the default “race” at the time of the play’s production, then the references to “great folly” and “strange folly” are simply the translation of early 1600s common usage in that day’s English.

Last fall, when I interviewed Williams in the lobby of his Brighton hotel, the only question I asked him was whether he thought that if the infamous abolitionist James Dixon had lived to see James Earl Jones play him, there would have been any ethnic problem.